The first weekend of October is the annual BirdFest & Bluegrass Celebration in Ridgefield, Washington. The Ridgefield National Wildlife Refuge has been on my list of places to explore for quite some time, and this seemed a perfect opportunity to make the drive.

I decided to aim for the Audubon-guided tours, which began with Saturday morning’s walk on the “Carty Unit”. (The refuge is divided into these “units” with different access levels, some of which vary seasonally.) I was feeling pretty good about this decision, too…until I realized my directions were pointing straight into the middle of the refuge, and not to the trailhead. I followed signs in town but ended up at the “River S” unit, which was closed for the day to allow bus tours (more on those later); across the street was a church where those tours were set to be staged, and so I pulled in hoping someone could quickly point me in the right direction. I had five minutes to get to the correct trail.

Across the parking lot, I spied another woman with a pair of binoculars. Going with my gut, I walked over, said good morning, and explained my predicament. She was a little hesitant at first, and I couldn’t blame her; how often does someone walk up to you looking for help finding a trail? She’d forgotten the BirdFest was this weekend and happened to have come up just to go birding herself but found the route closed; when I told her a little more about what I was trying to find, she offered to show me the way and hopped in her car after letting me know she wasn’t sure if we could get across town fast enough.

The timing was perfect. We parked just as the last few people on the tour disappeared from view, and the two of us hurried to catch up. To enter the refuge, the trail starts by crossing a large bridge above a set of railroad tracks. We were reminded of their proximity to the refuge several times during our walk!

The first leg of the trail leads through some grassy spaces with a few trees, leading to the Cathlapotle Plankhouse – a Chinookan plankhouse built here as it is the sight of the Chinook village of Cathlapotle, visited by Lewis and Clark on their great expedition. As you pass the plankhouse, the view opens up to a pond and wetlands below; great old oak trees grow on the other side of the trail.

It was relatively dry due to the time of year, but during wet seasons I understand it floods into marshlands. We saw a bald eagle perched in the distance, killdeer, starlings, mallards, chickadees, and gold crowned kinglets. In the distance, we could hear one of the stars of the BirdFest…the sandhill crane.

The sandhill cranes are a huge draw to the refuge, as they flock by they hundreds to spend the winter. They prefer open fields, however, and we were headed into wetlands and forested areas. There was no guarantee to see them…but we were in luck! A flock flew in as we walked through a clear space, and I was able to fire off a few shots of their graceful “V”.

You can see that some of them have a vivid red mask on their face; these are the adults. The younger birds lack the mask until adulthood. The birds are largely gray, although they may have a rust-colored wash over their feathers as well. The long legs are black, and along with the neck remain extended in flight.

Elated over seeing these fantastic birds (I was honestly concerned I would not, despite the number of them present at the refuge), we continued on. Reaching a fork in the trail, the guide lead the main body towards an easier hike with more level, stable footing; the possibility of seeing more by taking the longer loop she was bypassing proved too tempting for some, however, and so the group split in two. I was glad for my decision to take the longer route. Not five minutes later, we crested a hill to look out over a meadow that over the next few weeks is destined to become a marsh and were rewarded with the sight of incoming flocks of geese from the North. Mixed among the noisy honkings of Canada geese and cackling geese, a few greater white fronted geese were coming into the area.

Easy to spot from beneath, the greater white fronted goose has a black and white belly that appears checkered or horizontally striped. They were mixed with the Canada geese, which are of a similar size and wing coloring from beneath, but the Canada geese have a clear belly. They also have a black tail, whereas the greater white fronted geese have a lighter tail.

The remainder of the trail made for a wonderful Saturday morning hike that I look forward to repeating. Although slippery in a couple of places, the overall trail was easily traversed and trekked through a variety of habitats. We encountered downy woodpecker, green-winged teal (ducks), chickadees, song sparrows, Bewick’s wrens, and golden crowned sparrow. Meeting up with some others who had been on the trail, we also heard of sightings of western scrub jays, Stellar’s jays, northern harriers, red tailed hawk, great blue heron, and in the previous day, American white pelicans.

Feeling great about having two new birds for my list, I opted to go back to the church parking lot from that morning to catch one of the guided tour buses. The guides were being given by refuge employees, and one of their biologists was leading the one I joined. I sat beside a young girl who was there with her family, and behind a friendly second grade teacher who had brought her own kids along. The “River S” unit of the trail is seasonally closed to walking, and becomes a self-guided driving tour through that section of the refuge. Riding in a bus gave us a high vantage point to look out from, and we had a great deal of fun helping one another spot the birds and other wildlife we encountered. 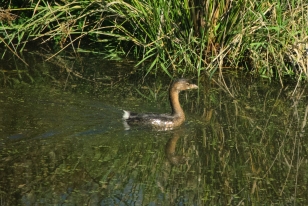 The biologist from the refuge told us a great deal about how they manage the water levels in order to encourage the right types of plant growth, ensuring plenty of food for the winter migratory birds. He also explained the selective hunting allowed for ducks and geese, and how closely it is monitored to be sure it does not negatively impact populations.

The refuge was founded in 1965 after an earthquake in Alaska the previous year had severely impacted summer nesting grounds for several of the migratory waterfowl who winter in Washington state. This primarily impacted the dusky goose, a variant of the Canada goose with a darker, dusky breast. It has a focus on sustaining populations of several animals, and is currently working to help strengthen the endangered Columbian white-tailed deer population.

If you would like to learn more about the Ridgefield National Wildlife Refuge, including volunteer opportunities and upcoming events, be sure to visit their site: http://ridgefieldfriends.org/

Be sure to check back for my next recap from day two at the Ridgefield BirdFest, walking the Kiwa Trail and driving the River S unit!